I recognize that it has been a while since my last post.  You may not know this about me already, but I’m a really good procrastinator.  I’m also forgetful and not always good at prioritizing.  Thus, these things all contribute to my sporadic posting.  I may try to work on it, but I don’t know how far I’ll get.

Anyway, it’s time for a beer…post.

Currently, I am working my way through wheat beers and I seem to like this category more than the pale ales.  The wheat beer I tried most recently is brewed in Germany (the apparent capital of wheat beers) by Hacker- Pschorr.  http://www.hacker-pschorr.com/en

They have a great website with lots of good pictures and process explanations.  They, too, brew in accordance with the German Law of Purity of 1516.  I’m tired of typing this without knowing it means so I did a little research.  It turns out that this is a real “thing”.  Sometimes the law is called Reinheitsgebot which translates to “purity order”.  Basically, the Germans were beer purists aka snobs.  Initially, the beer could only include certain ingredients, and for the most part, that’s still the case with just a few exceptions. 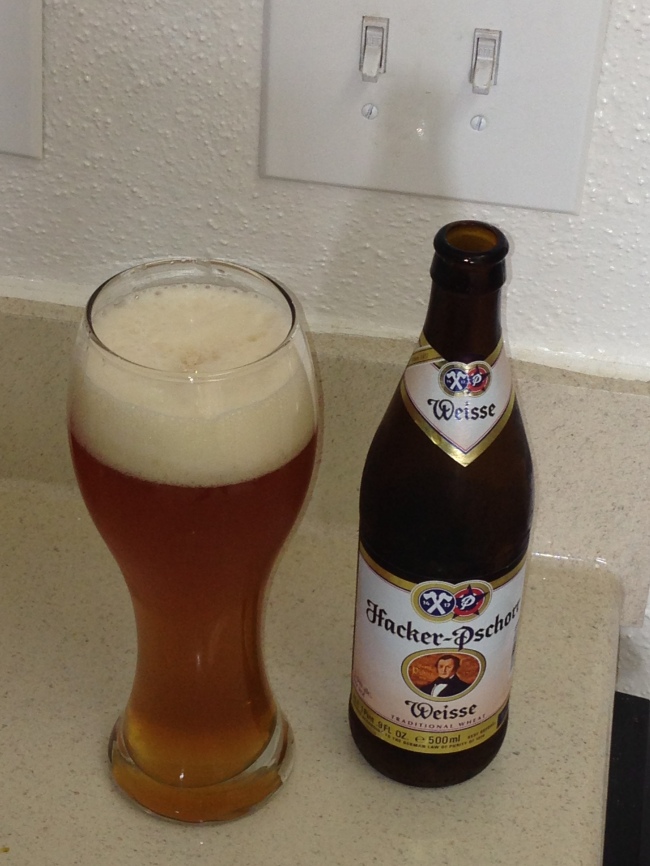 So, how does it taste? I didn’t like it as much as the Franziskaner but it was still tasty.  I used a Weizner glass in order to accentuate the taste and features of the wheat beer.  Honestly, I can’t tell if it made a difference.  The beer was slightly cloudy but had a pretty, golden color.  Overall, it had a good smell (smelled like wheat) and went down smoothly.  I had the strongest urge to cook a bratwurst and have it with it – which makes sense given the beer.

Have you tried Hacker-Pschorr before? What were your thoughts?

View all posts by brucedevon